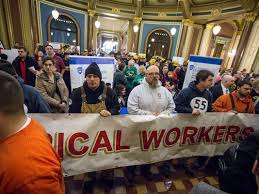 In overwhelming support unions survive a recent vote to maintain their organizations. This includes thousands of union members such as teachers, nurses, snow-plow drivers, and corrections officers just to name a few. Because of new laws passed in the last Iowa legislative session, all public sector unions were required to vote to maintain themselves as valid organizations. The overwhelming majority of these public sector unions did just that.Under new laws passed in February under the Republican lead Iowa House and Senate, unions were required to recertify before every new contract negotiation, which occurs every two to three years. Union supporters viewed these new laws as punitive to union existence. Despite the state’s new collective bargaining law an overwhelming 436 out of 468 public sector unions voted to recertify. Voter participation was very strong at 88 percent and sent a message to the state leaders.

Danny Homan, president of AFSCME Iowa Council 61 which represents more than 40,000 public employees in Iowa stated, “It shows that working men and women, both members and non-members want to have a union, want to have a voice at the table…I believe this sends a very strong message.”