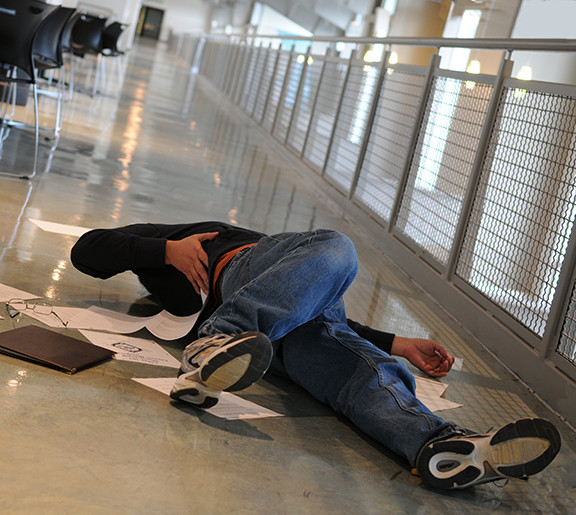 With cold winter weather settling in across most of the U.S., both indoor and outdoor walking surfaces can get slick very quickly. Watch out for those slick surfaces, and take precautions this winter to avoid a slip and fall accident.

Slip and fall accidents occur when a person falls on premises owned by another party and sustains an injury, like a back injury. This type of accident is common in many business establishments like grocery stores, shopping malls, and retail stores but can happen in any type of setting including work and rental properties.

While settlements vary widely, we thought it would be interesting to look at the top four settlements in U.S. slip and fall cases.

In January of 2012, Valerie Dantzler won a $1 million judgement in a slip and fall case against Wal-Mart Stores, Inc. The finding included a determination of 80% liability on the side of Wal-Mart which resulted in her being awarded $800,000.1 However, in May of the same year, the verdict was officially thrown out and the case was to be retried. It is unclear how the new trial has progressed.2

This case was pursued by the law offices of Parente & Norem, a personal injury law firm located in Chicago. A 48-year-old woman had fallen while using an interior concrete stairwell at her Section 8 Housing building on the South Side of Chicago. The stairwell had missing lighting, a missing handrail, and garbage on the steps. The case was settled after a week of trial for five times the amount that was originally offered as a settlement before the trial commenced.3 That’s why we say that your case going to hearing can be a good thing.

2. $12.2 Million for a Fall at a Virginia convenience store

Back in 2003, Annette Ritzman, the owner of a day spa, was the victim in a slip and fall at a convenience store called Miller Mart in Virginia. There was dark algae growth that had formed in the parking lot, and the store had not adequately warned their customers about it. This led to Annette’s fall, which resulted in her loss of consciousness and a serious brain injury. The settlement is believed to be one of the largest settlements in Virginia history.4

A University of Pennsylvania medical student fell through a manhole operated by Trigen-Philadelphia Energy Corporation and sustained spinal injuries that ended his education and career path. The company had been aware for a long time that homeless people in the area would remove covers from the manholes in order to search for shelter. It was found that in the decade that this occurred, the company had done nothing to fix the problem. The company was found 99.99% liable for the student’s injuries and the larger than average award was partially based on the loss of future revenue.4

Legal Representation is Critical to Success

While many people feel that they can pursue a slip and fall settlement on their own, it is highly advisable to work with a personal injury attorney. They understand the laws involved and have experience in negotiating settlements. It is their job to help you present your arguments and evidence in a professional and efficient manner in order to establish liability and pursue a fair settlement. If you or someone you know has been injured in a slip and fall injury in Iowa, contact Pothitakis Law today to help get your life back on track.